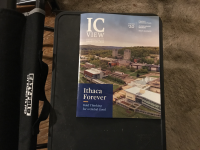 Well, here it is, four years later and Noah’s in the midst of another transition, this one bigger than starting elementary or high school. He’s living away from home, managing his own life, taking the first steps of young adulthood. I thought I should write a leap year blog post about that. “Vault Year” seemed appropriate, given the magnitude of the changes.

The problem, of course, is that he’s not here, and while we do text, he’s not what you’d call forthcoming with detail, so I’m not sure I know enough about his life to fill up a blog post. (Maybe that’s why when the Ithaca College magazine comes, I read it with more curiosity than my own alma mater’s magazine.) But here I am, giving it a try.

By the way, if you’ve got your own college student or soon will, my blog friend, Swistle, has two sons in college and recently wrote about communicating with college students. Here’s her take on it.

Here are some things I know:

I think that’s it. I’m tapped out. But that’s kind of the point of this year. He’s making his own way and we don’t know every little detail of what’s going on with him. And I think it’s going well. He seems happy, his grades were good last semester, and I expect the same this semester, though I haven’t asked. I think he’s still considering taking next semester off to volunteer for a campaign (either for whoever wins the Democratic primary or maybe something down ballot), but I’m not sure.

I can ask him in person soon because he’ll be home for spring break in a week. I’m looking forward to seeing him. We have no big plans, because North will be school that week, but we’re thinking of going to a maple sugar festival at Cunningham Falls State Park the Saturday before he goes back to school. It’s a little ironic, as Western New York is more maple sugar country than Western Maryland is, but it sounded fun.

Meanwhile, North thinks I should do my next leap year blog post about their senior year of high school, even though it’s the last year of something and not the first. It’s the year before the leap, they pointed out. It’s possible by then they’ll know where they’re going to college, or at least have it narrowed down to a few choices. It seems a lot closer and more real than it did when Noah was in middle school and I was barely thinking about college. Now that we’ve launched one kid, it seems like something that actually happens, not some abstract theoretical concept.

Of course, there’s still high school to get through. Thursday after school North proposed a walk to Starbucks because they didn’t have an afterschool activity and it was a sunny day, if a bit chilly, and we both had Starbucks gift cards from Valentine’s Day burning holes in our pockets. While we were there we talked about the pros and cons of the school they were assigned in the lottery, their first-choice school, and the Visual Arts Center. They won’t hear the results of the second chance lottery for a month and the VAC will be accepting students off the waitlist for another two months, so nothing has changed since the last time I wrote about this. North is simultaneously impatient to know where they’re going and sanguine about all the options. No matter how it turns out, I’m looking forward to seeing how their high school years unfold. I know now how fast they will go by.