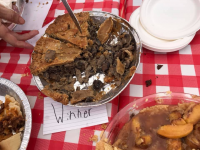 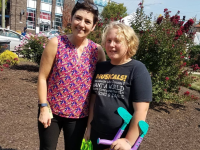 Noah seems to be doing well at school. He reports his work load feels more manageable than it was in high school and he has some free time, which he’s used partly for socializing. He’s mentioned playing cards and going out to dinner in town with people. He’s also involved in an extracurricular activity—he applied for and got an editing position for a show on ICTV, the student-run television station. This all makes me really, really happy.

It still seems strange and often hard not to have him here, particularly when we went to the Takoma Park Folk Festival without him two weeks ago, after having gone with him almost every year since he was a toddler. But we went and it was still fun. Plus, I can’t say I really minded having only one Back-to-School Night to attend.

Having fewer meetings is just as well as I have been really busy lately with work. Both jobs picked up at the same time—I’m back on retainer with Sara– and even though it still adds up to part-time work, it feels like a lot. It seems I’m always rushing to prepare for a conference call or an in-person meeting at EPA. (Okay, I’ve only had two of those, but I haven’t been to a work meeting in ages, so it was a notable event for me.) I’m also spending a lot of time running North to aqua therapy or physical therapy at the rehabilitation hospital or appointments at the gender clinic, which are both in the city and something of a schlep.

We’ve had some time for recreation, too, though. Last weekend we went to a housewarming at Zoë’s folks’ gorgeous new house, where we saw a lot of people we know, unsurprisingly, as North and Zoë have known each other since kindergarten. And this weekend North entered the annual Takoma Park Farmers’ Market pie contest.

North’s entered this contest every year since they were seven or eight years old. They won “most unusual” pie when they were ten with their cantaloupe pie, but not since then. This year they decided to try a savory pie, a mushroom one. The filling was button, cremini, oyster, portobello, and shiitake mushrooms with a gravy-like sauce and the crust was whole wheat with parmesan.

We had some fun trying to name it. On Saturday, I told North, “It’s tempting to call it Magic Mushroom Pie, but you probably shouldn’t.”

“No!” North exclaimed. My next suggestion was “Marvelous Mushroom Pie,” but they thought that still sounded “druggy.”

Later North was talking about how high the mushrooms were piled in the skillet, so I suggested, “Mile-High Mushroom Pie,” and North said to Beth, “I think Mommy wants people to think there are drugs in my pie!”

In the end North called it “North’s Mixed Mushroom Pie with Cheesy Crust” and it came out very well. The filling was well seasoned and moist without being too wet to hold together when it was sliced and the crust was hearty enough to contain the filling. The judges must have thought so, too, because there was a tie for first place in the kids’ category and the Mixed Mushroom Pie was one of the winners. We actually found out before the winners were announced because the judges set the winner cards next to the winning pies ahead of time. But when they announced the winner, North got their picture taken with the mayor, and was awarded a ribbon, a free farmers’ market tote bag, and two five-dollar tokens to use at the market.  Then we got in line and bought six slices of pie, three for lunch, and three for dessert. We all got North’s pie for our first course, then I had a slice of peach pie, Beth had lemon custard with blueberries, and North had chocolate cookie pie.

It’s always nice to win something, but this one came at a particularly good time for North. They’ve been saddened and stressed by a few things lately. Highwood, the theater where they’ve been acting for the past couple years seems to be imploding. Of the two main staff people, one got another job and moved away and the other one was fired, and then most of the board quit. It’s unclear if it will be able to rise from the ashes or not, but there’s no fall musical in rehearsal right now, and North had been planning to try out for that. Highwood is a big part of North’s social world and it “leaves a hole,” as Beth said in discussing it with another Highwood parent. North’s taking an acting class at the rec center (the same one they’ve taken a few times before) and I’m sure they’ll enjoy it but it’s not the same thing as being in a full-scale production of a play. I’ve been suggesting they join the drama club at school, too, but it hasn’t started up yet.

There’s been some small progress with their leg pain—the aqua therapists at the rehabilitation hospital are impressed with their stamina in the pool and they’re using a cane instead of crutches on their better days—but it’s not as much progress as any of us would like. Some people’s reactions aren’t helping. North didn’t participate in gym class for nearly the whole second semester of seventh grade and at our request, their current gym teacher is having them walk around the track while other students are running or playing games. It’s not ideal but it’s an improvement over sitting and watching. So it was quite annoying that one day last week when they were walking around the track a fair distance behind their own class and another class came running by them the teacher for that class (who was North’s gym teacher in sixth and seventh grade) said “everyone knows” that they’re faking. And there have also been occasional comments along this line from students. North is sensitive about these accusations so that’s getting them down. But I’m happy to report when we told North’s counselor what happened she spoke to the teacher and he apologized to North. (The counselor is kind of fierce and we all think she may have read the teacher the riot act.)

So overall the beginning of eighth grade has been something of a mixed bag. On the plus side, North, who’s been negative about math for a couple years, likes their geometry teacher and her class, which is great and North’s also enjoying taking art for the first time since elementary school and having Zoë in some of their classes, unlike last year when they didn’t have any together.

Today is both the fall equinox and North’s half-birthday, so after dinner we had the traditional half-birthday cupcakes. We picked them up at a bakery over the weekend. I got carrot cake, Beth got chocolate chip, and the celebrant got red velvet. The weather is still hot here. The predicted high for today is 92 and I see a lot of 88s and 89s in the extended forecast, but I know eventually it will get cooler and the leaves will start to turn and it will feel like fall. I hope as that happens we see some other turning points at the theater and in North’s recovery.