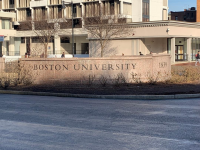 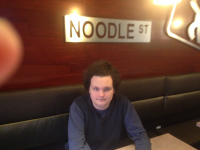 Noah skidded into the end of first semester in a blur of late work and later nights. He never did finish all his English assignments, because they’d gotten backed up behind other work, but what’s done is done (or not done, I guess). Then the kids had a three and half day weekend (early dismissal Friday and Monday off) to allow teachers to complete their end-of-semester grading. This was really nice for Noah, who had almost no homework. He practiced his drums or bells every day and we read so much of Crooked Kingdom that we almost finished it. On Monday I gave both the kids some chores around the house and yard and Noah sawed up some weed trees Beth had felled earlier so they could be bagged with the yard waste. He also helped me make baked ziti for dinner.

And then the next week barely happened. The kids went to school on Tuesday, but snow was forecast, so they had an early dismissal. It did sleet and then snow, about an eighth of an inch on my official measuring table, and it was over by early evening, so of course there was a snow day on Wednesday and a two-hour delay on Thursday. Yes, there was an inch or two in other parts of the county and yes, the delay was not for snow, but for morning temperatures in the single digits. I was still exasperated, because it meant we went over our limit of snow days for the year before January was even over. The school district has added a day in June and can add one more before we come up against the Governor’s absurd last-day limit. After that they either start chipping days from our already shortened spring break or they apply to the state for a waiver. I’m not enthusiastic about either of these options, to put it mildly. As a work-at-home mom, I really like getting those days back later in the year, but I’d also like for the kids to have a spring break. It was also too bad one of North’s Honors Chorus rehearsals was cancelled, because it only meets for two months.

On Friday morning, it was snowing again and I was surprised the kids went to school on time. But, puzzlingly, there was an early dismissal, which had the buses on the road at a time of day when it was actually snowing harder than it was when they would have normally come home. But never mind. I no longer expect any of this to make sense. I took advantage of having the kids home to make them shovel the walk, because this snow (about an inch and a half) actually required shoveling, unlike anything that fell earlier in the week.

Meanwhile, my friend Nicole who lives in Calgary, reports that her ninth-grader went on an outdoor education field trip that same week. It started with the kids skiing twelve kilometers uphill and staying for two nights in their choice of either a “backcountry cabin,” which I’m thinking was probably unheated or a snow shelter they built themselves. Let’s think about that contrast for a moment and hope the Canadians never invade, because, as Beth observed when I told her about this trip, if they do they’re going to kick our American butts.

Well, moving on…The next weekend was something of a relay race because Beth and Noah and I left on two separate trips. One of Beth’s cousins died unexpectedly (and quite young, in his mid-thirties) and she went home to Wheeling for the funeral. She left straight from work on Friday and flew home Sunday morning. Shortly after she got back, Noah and I left for Boston for a quick trip to visit Boston University.

Between March and August of last year we visited eight schools with Noah. He applied to three of those, plus BU, which he got interested in late in the process. He’s been admitted to Ithaca and UMBC (and the honors college at UMBC), but he’s still waiting to hear from R.I.T. and BU. He was having trouble ranking his choices without having visited BU, so we decided to make one last first-round college visit. Ironically, we were in Boston (to visit Emerson) on our very first college road trip almost a year ago, so it feels as if we’ve come full circle. We could be travelling a lot more this spring, though, for admitted students days, (and if he makes the first cut for a scholarship he applied to at Ithaca, for an interview there).

Getting to Boston turned out to be a little more exciting than anticipated, at least at the very beginning of the trip. We had a late afternoon flight on Sunday and around ten in the morning, when I decided to re-arrange all the cards in my wallet so everything I needed would be handy, I discovered my ID was missing.

So, a half hour later when Beth got home from her emotionally draining trip (which she made with a bad cold), I met her at the front door crying and she had to calm me down. She helped me look for the card for another half hour and then we gave up and she investigated flying without state-issued ID. She found you can sometimes, at TSA discretion, if you undergo extra screening, so I brought a long-expired passport (issued in 1987) with me and hoped for the best.

When we got to the airport, I showed the agent the passport, my voter ID, and my debit card. She asked if I had anything else with my name on it, like an insurance card. But I get my health insurance through Beth’s job so the card has her name on it but not mine. I showed it to her anyway and pointed out that Beth’s last name is the other half of Noah’s and oddly, that seemed to do the trick. I was taken aside to be patted down, but they let me through security. I’m not sure that would have happened if I hadn’t been a middle-aged white woman.

The flight itself was uneventful. We took a shuttle to the hotel, found a nice little crepe place for dinner, and were back at the hotel by eight. I needed to decompress and I considered whether a swim or a reading Crooked Kingdom with Noah would be more relaxing. I went with the reading. We finished the book and then I read The Night Ocean on my own while he watched something on his laptop until ten o’clock, when we went to bed.

It was the night of the Super Bowl and we were in Boston, but I didn’t hear any celebration. There was a police presence in the lobby of the hotel and we saw four busses full of police officers going down the street—bound I don’t know where—so I guess it wasn’t quiet everywhere in Boston that night.

In the morning we had breakfast at the hotel and headed for the university for an information session and tour. The information session was pretty standard. When the administrator running it asked all international students to identify where they came from, in order to determine who had come the farthest, he seemed surprised at how many of them were from China. I wondered if Chinese students take advantage of their lunar new year break to visit colleges abroad.

The tour was next. It was a beautiful day for it, in the high forties and sunny. The sidewalks were wet with snowmelt and everything looked washed and shiny with it. We’ve been to a couple urban campuses and this one was more like Carnegie Mellon than Emerson, by which I mean there’s a defined campus set down in the middle of a city, rather than being tucked into a couple adjacent office buildings. It’s bordered on one side by the Charles River, which was partly frozen, and the T runs down that street, which I imagine is convenient. Some of the buildings are brick and concrete rectangles, but there are more pretty Victorian and Gothic buildings, though very little green space. Some of the dorms are huge towers (one houses 1,800 students in three interconnected towers) but there are also converted brownstones that house fifteen to sixty students each. The dorm room they showed us was in one of the tower-style dorms (not the biggest one), which I guess was honest, because more students end up in those.

After lunch at an Asian noodle place we’d spied on the general tour, we took another tour, this one of the School of Communications. It was our own private one—with three tour guides! They talked a lot about how state-of-the-art the facilities and equipment are, which is important to Noah. I’m no judge of this, but Noah seemed to agree with that assessment. Also, the fact that professional broadcast journalists regularly use their studios is impressive. When the guides asked him where else he’d applied, they said a lot of people who apply BU for communications also apply to Ithaca and Emerson, so that made me feel he must have visited and applied the right schools for what he wants to study.

One discordant note, though, was that all three guides kept making jokes about how communications students don’t like math, not just once, but over and over again. And Noah’s very good at math. It got to the point where I wanted to mention he took AP Calculus BC in his junior year and aced the exam, that he got an almost perfect score on the math SAT and that he’s taking magnet math this year, even though he’s not in the math magnet, just to make them stop. It’s actually relevant because it made me suspect there’s not as much cross-fertilization between film and computer science as Noah would like. That collaboration between departments is one of the reasons Ithaca and R.I.T. both seem like good fits for him.

Noah didn’t have much to say after the tour, which isn’t unusual for him. He often needs time to let experiences settle before he makes a judgment. After the School of Communications tour, we had a couple hours before our shuttle to the airport. It would have been nice to explore Boston or the campus a little more, but he had homework, so we got a chocolate milkshake (him) and a strawberry smoothie (me) at a café where we meant to stay so he could work there, but it was playing sports radio at a pretty loud volume, so we headed back to the hotel lobby where he wrote responses to two chapters of Brave New World and I charged my phone and worked on this blog post. Back at the airport, I managed to get through security yet again, and we had dinner at Sbarro (him) and Friendly’s (me) before getting onto the plane and flying back to a busy week for both of us.

We’ve all been hoping this will be an easier semester for Noah, because he swapped Logic for Statistics and the CAP Senior Seminar for Health. It’s hard to judge right now because we’re only two weeks in and they’ve both been irregular, disrupted weeks. He’s struggling to catch up from having been out Monday (and to be honest, I was, too, for a few days). He entered this weekend behind in three subjects. But whether second semester is easier or not, in four months he’ll be done with high school and looking forward to starting a new chapter in his life, somewhere north of here.