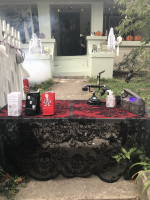 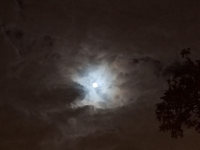 So in the end I wrote another twenty postcards to Michigan voters and seventeen to Iowa voters (that last number was how many stamps I had left). I mailed the Iowa batch Friday morning. Time’s up for getting things in the mail and I voted a week and a half ago (via drop box), so all I can do now is wait, but Beth is going to phone bank on Monday night.

We’ve been trying to decide what to do on Election night, as watching the returns come in and not watching the returns come in seem equally impossible. Beth bought “emergency ice cream” and when I asked her if that meant we couldn’t eat it if Biden won, she said then it would be “celebratory ice cream.” What I remember about snacking during the night of the 2018 midterms, though, was that I thought I’d overeat Halloween candy but when it came down to it I was too nervous to eat much at all.

Okay. That’s all I’m going to say about the election. The rest is all Halloween. Though we were all sad about the cancelled parade and costume contest, I think we salvaged a half decent holiday.

On Wednesday night I made soup in a pumpkin. The kids aren’t fans of this soup, which consists of evaporated milk, rye bread crumbs, swiss cheese, onion, mustard, and horseradish, served with chunks of the cooked pumpkin, but Beth and I like it so I make it most years around Halloween and feed the kids canned soup.

Around 5:45 Thursday afternoon, I was asking Noah about his evening plans when he remembered we’d all been invited to the outdoor premiere of the movie he’d been helping some local families make and it was going to start at 6:30. The film is based on The Invention of Hugo Cabret. There’s a group of families that traditionally put on a play around Halloween (not always Halloween-themed), but this year they decided to make it a film, so people could watch it remotely. Noah did some of the filming and lot of the editing. The gathering was just for people who were involved in making the film and their families. After some hurried consultation, we decided Beth and I would go and North would watch the film later. The screening took place on the deck of a house. There wasn’t room for people to stand six feet apart, but I managed at least three feet most of the time and everyone was masked. After the screening, there was carrot cake and a little awards ceremony. Noah got a statuette that said “Miracle Editor.” When the director presented him with it, she said he’d made “a silk purse out of a sow’s ear,” working under tight deadlines without a lot of direction. It was a fun event and it’s always nice to see your kids recognized, so I’m glad we made it, even if I was little nervous about the contact.

Here’s the film, if you’d like to watch it. It’s thirteen minutes long.

When we got home, the cinematic fun continued.  We watched a series of vintage short horror films the city of Takoma Park was screening, while decorating paper bags with Halloween-themed stickers and filling them with candy, stickers, stamps, and temporary tattoos. The first film was from 1896 and consisted a thirty seconds of a dancing skeleton, whose pieces come apart and then reassemble. We watched a about an hour and fifteen minutes of films, ending with a 1912 version of Dr. Jekyll and Mr. Hyde. In that span of sixteen years there was a lot of innovation in how to tell a story on film, including the introduction of intertitles to provide dialogue or explanations of what’s going on. In the earlier films, it’s often a little hard to follow the plot. In a funny coincidence, a lot of the films were by George Méliès, who is character in Hugo’s Cabret’s Big Fix. When The House of the Devil (by Méliès) started, Noah said, “I’ve seen this.” When I asked when, he said in his sixth grade media class. It was this class that got Noah interested in silent film. (I remember one night when he was eleven, he showed us several of his favorites. I probably should have had an inkling then that he’d be a film buff.)

Friday night AFI was screening Nosferatu and that was also fun, especially since we’d just watched Dracula the week before and Beth and I had an interesting conversation comparing the two afterward. I have a soft spot for classic horror, so it was nice to watch so much of it this month.

In other Halloween observances, we did decide to enter the yard decoration photo contest and we didn’t win, but those are the breaks. Our letter carrier told me that we have the best yard on his route, so there’s that. On Halloween afternoon I had Noah set up his tripod so we could get a picture of all of us in the Halloween masks Beth made and we’ve all been wearing for the past few weeks, since they probably won’t be getting much more use (unless we still need them next year). North had a seizure during the mask photo shoot and fell to the grass, which seemed to encapsulate the year we’ve been having. (By the way, the brain MRI came back normal.)

Noah and I watched Rosemary’s Baby that same afternoon, which was fun. He decided not to accompany North (dressed as a galaxy) and Zoë (dressed as Hawaiian Punch—a Hawaiian shirt and a boxing glove) trick-or-treating, but North did fine with the walker and didn’t need the wheelchair.  They came home with just a little less candy than a usual year, though they had to walk a long way to get it because there were fewer houses giving out candy.

Back at home, Beth, Noah, and I set up our candy table and took turns supervising it from five to nine. We decided to have only six bags of candy out at a time in case anyone got the idea to grab it all. (One teenager did make off with four, which made me wonder, if you’re going to be greedy, why not just take them all? I mean, the karma wouldn’t be much worse.) After every group of trick-or-treaters, we’d restock the table. I didn’t expect anyone in the first hour, but we started getting customers pretty soon after we were set up. During my shifts, I saw a couple Power Rangers, skeletons, and kids in Scream masks, Bat Girl, a hunchback, a devil and angel, and a unicorn with a light-up rainbow horn. At least half the time, though, I couldn’t make out what the costumes were because it was dark and I was on the porch, probably about ten feet from the table. That was a little sad because seeing the kids’ costumes is one of my favorite parts of Halloween. Some of the kids were perplexed by the bags because they couldn’t see what was inside, and that led to their exasperated parents saying things like, “Just take the one you already touched.”

By 8:05, we were down to five bags of candy and I thought we might run out, so I bagged some more candy in undecorated sandwich baggies, but we didn’t need to put them on the table. There were only two more trick-or-treaters before we closed up shop a bit after nine.

North came home a little after nine and put a mason jar of water outside in the moonlight to make moon water because in addition to being Halloween, it was also a full moon, and a blue moon to boot. That hasn’t happened since 1944 and won’t happen again until 2039. This unique Halloween wasn’t all bad—it was actually pretty good considering—but given the reasons we were all avoiding crowded parades and close contact with dressed up neighbor children seeking candy, I wouldn’t mind not having another like it for a long time. Once in a very blue moon is plenty.