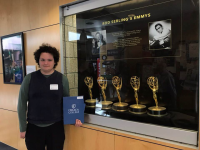 Late Friday morning, after just four days at home, Beth and I were pulling into the parking lot of Noah’s school to pick him up halfway through the school day, for our last college trip. We were going to Admitted Students Day at Ithaca College. I asked Beth if she would sometimes like to know if North will go to this high school so she knew exactly how nostalgic she should feel about the fact that Noah will be finished attending it in just over a month. She said no. Turns out that’s just me.

We rolled into Ithaca around dinner time. It’s a slightly shorter trip than Rochester and we didn’t have to make a detour to the airport this time. We found our AirBnB, which was in a neighborhood of stately old houses in eclectic architectural styles, many of them slightly shabby but cheerfully decorated with strings of lights or Japanese lanterns or Tibetan peace flags or colorful woven hammocks on the porches. The yards were dotted with flowers or yard signs supporting liberal causes, pretty much the same ones you’d see on a stroll through Takoma Park.

We walked a few blocks to a pizza place, where we got pizza, Stromboli, and garlic knots. While we were standing in line to order, there were some college kids behind us in line, talking about how they were meeting friends at ten, so there should be time to go to the gym after dinner and before that. It took me back to my younger days when plans could conceivably start at ten. Now if they end at ten, it feels like a late night. It made me hope when Noah’s up late a year from now, it’s not always because he’s working.

Noah wanted to watch a movie, so after some discussion we settled on A Serious Man and watched the first half before bed around ten, because though I might like to reminisce about late nights in college, I don’t actually want to relive them.

In the morning, we had breakfast at the AirBnB and headed over to the college. We registered and settled in at one of the tables set up in the middle of the stadium. There was a student activities and services fair going on around the perimeter. Beth went and collected some brochures and freebie pens while Noah set up his laptop and tried to get some work on his Chaucer PowerPoint presentation done. Like hobbits, we had a second breakfast of muffins and bagels. Eventually it was time to move to the folding chairs set up at the front of the stadium floor. A dance club performed and then some administrators spoke and then the admitted students left to go hear a panel discussion of current students while the parents stayed behind and heard more administrators and a student speak about Ithaca. Beth said she thought it was a good idea to split the kids off from their parents in case they had questions they didn’t want to ask in front of the their parents.

Indeed, Noah came back claiming they’d all been sworn to secrecy, but he did mention the current students gave tips about which dorms were quiet ones and which one were more party-oriented. (Meanwhile, the parents were listening to the administrators talk about how drug use isn’t endorsed anywhere despite the existence of a substance-free house. This discussion went on for quite some time, apparently because New York may be legalizing recreational marijuana soon.) Noah also had some restaurant recommendations and was informed there are so many hills on campus, the student all develop “Ithacalves.”

There was a buffet lunch set up in the stadium and the vegetarian options were much better than what we ate at RIT. There was cheese tortellini, baked tofu, salad, fresh fruit, and cupcakes.

After lunch, it was time for the academic presentations. We went to the Park School of Communications, where we started off watching video presentations and speeches by faculty and students. There are ten majors in the school—Noah was accepted to Emerging Media—but what struck me was how much interaction between them and flexibility within them there seems to be. This was something that concerned Noah at RIT. He thought the Motion Picture Sciences major seemed like it might be too narrow. There also seems to be a lot of institutional support and encouragement for undergraduates to attend conferences or get travel funds to film events or meet sources for documentaries.

Two of the students who spoke had oddly specific things in common with Noah. One had two moms and was making a documentary about meeting her donor and half-siblings. Another travelled to the Women’s March and filmed it with a 360-degree camera, which is also something Noah’s done (even with the same kind of camera) while assisting CWA’s videographer. It almost seemed like a sign. Of course, when the singers at RIT sang a song called, “It’s Your Puzzle,” that also seemed like a sign, because Noah’s Common App essay was about puzzles. And the RIT mascot is a tiger and when he was two, he loved to wear his tiger costume and insisted on being addressed as Mr. Tiger when he did so. (It was also the mascot of his first elementary school.) When you’re trying to see the future, signs are everywhere.

Next we had a chance to meet with the director of Emerging Media and two current students in the major. We had a surprisingly long and detailed talk with them. One of the students is a double major with Computer Science—Noah is very interested in the intersection between computing and film. Noah got some handouts outlining the requirements for the major and different tracks you can take within it and asked some questions about how his AP credit in calculus and computer science will count as coursework. The director asked what other schools Noah was considering and while he, of course, favored Ithaca, he said RIT was a good choice, too. He was somewhat dismissive of Boston University, which he said was more focused on graduate students and wouldn’t offer the same kind of opportunities for undergrads. It reminded me how at BU, the tour guides seemed to think highly of Ithaca, but not RIT. Everyone has a different opinion, but hearing a few of them can help a composite picture emerge.

Before we left campus, Noah posed by the display of Rod Serling’s Emmys, which are housed at Ithaca because Serling taught there. (Noah’s merit scholarship is named after Serling.) We could have gone on to see dorms and dining facilities, but we were all kind of tired, so we went back to the AirBnB, where Noah and I read the second act of A Doll’s House and then I napped while he worked on the Chaucer presentation until it was time to leave for dinner.

We ate at Moosewood when we visited Ithaca in August and Noah wanted to go again and I certainly had no objection. I had a samosa wrap, Beth got a vegetable soup and a cheese plate, and Noah had pasta with asparagus in a cream sauce. We stopped at an ice cream parlor on our way home and watched the rest of A Serious Man.

While not as unfortunate as the besieged protagonist of the film, Noah is a serious young man and not prone to quick decisions. He’s going to make a pros and cons chart over spring break, which started today. He’s behind in a couple classes and he worked on statistics all day today, but I hope he has a little space over the next few days to relax and to weigh his options.