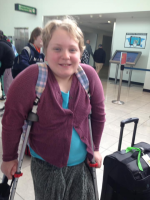 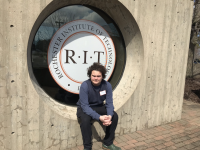 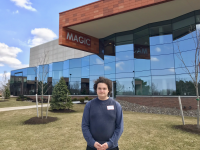 From “Southern California Wants to Be Western New York,” by Dar Williams

The children persist in growing up. Late Friday morning we dropped North off at BWI airport to join thirty-six of their classmates in the Spanish immersion program who were embarking on an eleven-day trip to Bogotá. The trip takes place every other year—you go in seventh or eighth grade—and in the alternate years, the French immersion kids go on their own trip.

We’d hoped North would be off crutches by the time they left and the fracture is healed, but despite twice-weekly physical therapy, they still have pain when they put weight on that leg, so the crutches went to Colombia with them. That meant we needed to stay in the airport for an hour or so, until their suitcase was checked. Not that we were the only parents lingering. Apparently sending your twelve-to-fourteen year old off to a foreign country without you is a little unnerving. But the first couple days they were gone we received a steady stream of texts and pictures. It’s slowed down, but we’re still getting dispatches from them and we also got a nice email from their host mom, so we don’t have to wonder how they’re doing. They seem to be having a great time. More on North’s adventures in a later post.

After we tore ourselves away from our jetsetter and collected Noah from the bench where he was working on computer science homework on his laptop, the three remaining members of the family got lunch at Panera and then hit the open road. We were headed for an Admitted Students Day at RIT. (Next weekend we’ll be back to New York state again, for Ithaca’s version.)

We arrived at our hotel around 9:30,  after a long drizzly drive. As we drove north, I could see spring receding. The flowering trees disappeared and there was even a dusting of snow on the ground at the highest elevation, near the Pennsylvania/New York border. We had dinner at a brick oven pizza place about one hundred miles from Rochester. For much of the ride, Beth and listened to podcasts—Throughline, Invisibilia, Hidden Brain, and Desert Island Discs while Noah disappeared into his headphones to listen to his own podcasts and watch television on his laptop.

In the morning we had breakfast at the hotel. The breakfast room was crowded with teenage boys in track suits, some kind of high school sports team from Montreal, we gathered. They were well behaved—which isn’t always the case for large groups of teens in hotels—but it made for tight quarters. There were also a couple teen boys with middle-aged parents I thought might be going where we were.

When we arrived at RIT, we were greeted by the pep band, wearing orange and white hockey jerseys, standing on the steps of the building where the event started, and playing a cheerful tune. I noticed there were a lot more young men than women streaming into the building. (We later learned from a tour guide the student body is 70 percent male.) When we took our seats in the stadium where there was a mostly female a cappella group performing. I joked to Beth they were there to convince all these young men that there are women at RIT.

There were some speeches by administrators and then we were split up by schools. We followed a student carrying a School of Film and Animation sign to the brand-new MAGIC Spell Studios building, which opened this fall. We started in an auditorium where the interim director and other faculty gave an overview of the different majors within the school. It was during this presentation we realized that co-ops (paid, full-time, semester or summer-long internships required by most majors) are not required in the School of Film and Animation. For me, the co-op opportunities had been one of RIT’s draws.

When it was time to tour the building, we went with the Motion Picture Sciences guide. This is the program Noah applied to. It’s an engineering-based program that covers the technical aspects of film. We saw studios for color correction, sound mixing, a big green screen (but not the biggest one they have) and a couple grip cages full of equipment. Noah said later it was a really impressive facility and he’d know.

Lunch was provided, but the vegetarian option was a sad, sparsely filled roasted vegetable sandwich that was mostly lettuce and peppers. It was similar to lunch at UMBC, actually. I wondered if they use the same catering service. There was fresh fruit and brownies, though, and I had smoked almonds in my bag, so I supplemented my lunch with those.

Next we took a residence hall tour. The guide showed us a standard dorm room and lounge. The most interesting feature of the tour was the network of tunnels that connect the dorms to each other and to the academic buildings. It’s a nice feature on a campus with harsh winters, but they’re in use all year. There are student-painted murals on the walls, some dating back to the nineties, but there’s still blank space you can request to paint. There are laundry rooms and mailrooms in the tunnels under each dorm, and even a convenience store. It’s a whole hidden, underground part of campus.

In Noah’s information packet there was a coupon for the Ben and Jerry’s in the student union, so we were forced to go get ice cream. After that, we went to Disability Services and learned how Noah can pick up his ADHD medication and to Spectrum Services to talk to two very nice administrators about what kind of support and social and organizational coaching they offer. For those of you who weren’t reading this blog back in the day, we had Noah tested for Asperger’s when he was nine. He didn’t quite meet the criteria, but the psychologist who tested him said he had a lot of the same characteristics and challenges kids on the spectrum have. And you don’t need an official diagnosis to use Spectrum services, so it’s nice to know there’s a built-in support network if he cares to take advantage of it.

That appointment was our last stop of the day so we went to the bookstore to use another coupon to buy A Handmaid’s Tale (because Noah and I are thinking of making it our next mother-and-son book club book and I’ve lost my copy) then back to the hotel room so Noah could research a paper about Chaucer for a few hours. But before he started to work, we debriefed a little. He was concerned that the Motion Picture Science major might be too technical and not creative enough. He’s interested in technology and skilled with it, but he is interested in the bigger picture of storytelling, too, so to speak. We talked about how he’s eligible to take other classes in the School of Film and Animation that might be more on the creative side, even if they’re not requirements. He seemed pensive and unsure. I think this is going to be a hard decision for him, but maybe the visit to Ithaca next weekend will put the schools side to side in a helpful way.

When Noah’s laptop ran out of power we went into Rochester proper for a late dinner at a Asian noodle restaurant. As we walked down a residential block where we parked the car, I noticed snowdrops and crocuses in people’s yards, underlining the fact that we’d driven into an earlier, more tentative phase of spring than we’re having at home, where there are daffodils everywhere and the cherry blossoms are past peak, and there’s a sprinkling of early tulips. (Rochester still had big piles of melting snow in parking lots.)

By the time we got back to the hotel, it was late, so I had a shower, Noah had a bath, and we all went to bed. In the morning, we ate breakfast and hit the road again. Beth and I listened to more podcasts, mostly Hit Parade, a music history podcast about—you guessed it—songs that have been in the Hit Parade over the decades. In an episode about songs that peaked at #2, there was a snippet of Smokey Robinson and the Miracles’ “Shop Around,” and Beth and I sang along with the line “My mama told me, you better shop around.”

It’s true, both Noah’s mamas advised him to shop around, but the time for that is almost over. There’s just one more college to visit and sometime in the next few weeks, he’ll make his choice.