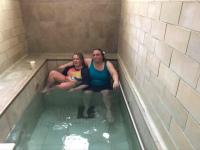 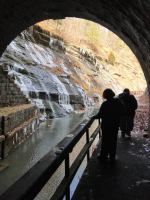 The day after Valentine’s Day we drove out to Berkeley Springs, where we were spending the long weekend. We arrived around noon and had just enough time to get lunch—vegetarian sliders for Beth and me and naan pizza for North—before our one o’clock appointment at the state park spa.

There’s a warm spring in the park, which was used first by Native Americans, then colonists, including George Washington, who visited as a teenager and then returned throughout his life. You can see the outdoor tub he used. The spring water is tepid, a constant 74.3 degrees, and runs through a series of little canals in the park. There’s also a water fountain where you can fill bottles for free.

Inside the spa buildings, you can get various treatments, but we were there to take a Roman bath in a big, private, tiled bathtub filled with heated spring water. There’s a bench on one of the short sides and there was plenty of room for the three of us. We visited Berkeley Springs on the kids’ spring break several years ago and I remember it was a little crowded with four, but that could have been because the kids kept splashing each other. North said the water was hotter than they remembered, but it was about how I remembered it. You do feel very relaxed when you get out.

After our bath we browsed the shops in downtown Berkeley Springs. North, who has become a Wiccan—did I mention that? I don’t think I did—was particularly interested in checking out the crystal shop, but didn’t want to buy anything on our first day. We also wandered around an antique mall, where I found the issue of Life magazine from the week my mother was born and took a picture of it for her. It had a photograph of a young woman in short braids and a flight suit on the cover, with the caption “Air Force Pilot.” It was cool to see. There were also some non-antique things for sale, including Trump 2020 socks—less cool.

After window shopping, we checked into our room at the Capacon State Park lodge. Beth and I read for a while and North amused themselves with their phone until it was time to leave for dinner. The restaurant was still decorated for Valentine’s Day. There were heart-shaped balloons and a scattering of rose petals on every table and we were given three red roses. We had a very nice meal—starting with warm brie with apple slices, apple butter, and walnuts. I had a vegetable-pasta dish with smoked mushrooms and a creamy sauce made of pureed squash and crème brule for dessert. I was really pleased to see that on the menu because I had actually been thinking I was in the mood for crème brule as we were driving to Berkeley Springs.

Back in our room, we watched half of To All the Boys: P.S. I Still Love You to follow up on having just watched To All The Boys I’ve Loved Before on Valentine’s Day at home. (North thought we should watch a romantic movie, so we let them choose one.) Then we went to bed, but we didn’t sleep well, at least Beth and I didn’t, because the people in the room next door were conversing loudly into the wee hours. (They were square dancers staying at the lodge for an event and I’d said to Beth earlier that surely they’d go to bed early because they were an elderly bunch for the most part—but apparently we go to bed earlier than elderly square dancers.) This was unfortunate because I also had trouble getting to sleep at home on Friday night and after two consecutive nights of suboptimal sleep, I was really tired the next day.

But I soldiered on. We had breakfast in the lodge restaurant and then we headed out for a hike along the C & O Canal and through the Paw Paw tunnel. This tunnel was bored through a ridge  in the nineteenth century to allow the canal to bypass a series of bends in the Potomac. It’s over three thousand feet long and very dark inside. There’s a muddy path—the ceiling drips—with a railing and it takes about fifteen minutes to walk from end to end. Beth lit the way in front of us so we could avoid stepping in puddles.

When you emerge the towpath continues beside the canal which has a steep rocky slope on either side. It’s made of shale, and there are frequent landslides, so there are nets to protect you from falling rock and in some places, the park service has scaled off loose rock and screwed metal plates into the rockface. (Someone had scratched Trump 2020 onto one of these. But it was not completely Trump country. We saw a Tulsi Gabbard lawn sign, of all things, one day.)

It was a mild, sunny day, probably in the forties, and there were a lot of rapidly melting icicles covering the rock and more or less continuously breaking off and shattering on the rocks or slipping into the water. If you looked closely you could see water running under the sheets of ice or in some cases inside hollowed out icicles. There was a place where the water splashing from a little waterfall had coated dried grass with a what looked like a spiky crown of ice. The last time we walked this path was in the spring, so I’d never seen all the different ice formations before. It was kind of magical.  A little further down the canal, there was open water and we saw a bunch of salamanders wriggling in it.

Heading back toward the tunnel, North gathered up a bunch of shale shards and we threw them into the canal, trying to break the ice. It took a while to get one to go through, but eventually we both sunk some to the bottom of the canal. Back in the tunnel, North had the flashlight and they shone it on the opposite wall to reveal a lot of sleeping bats.

We returned to Berkeley Springs and had a late lunch at a café with really good coffee. I later said to Beth it tasted like the coffee at Mayorga, a coffee company that used to have a coffeeshop in our neck of the woods. Beth exclaimed that it was Mayorga coffee. She’d seen the bags of coffee beans. She then pronounced me a “coffee savant.”

After lunch we visited Give Purrs a Chance, a cat café and adoption center. Actually, we went right before lunch to see if there was food there, but it was heavy on the cats and light on the café, with no food on offer, so we left to eat and returned. I’d never been to a cat café before. This one is in a Victorian house. The cats have the run of the place, with one room reserved for shy cats and another one for kittens. We visited all the rooms. When the staff person asked us, “Do you want to see the kittens?” and we said yes, she said, “No one ever says, ‘No, I don’t want to see the kittens.’” We spent a lot of time in that room. North particularly liked a tiny, feisty, black kitten named Agnes. There was a staff person in the kitten room who asked everyone who came in “Do you have cats at home?” and then, “How many?” and no matter what you said, he’d answer, “That’s not enough.”

The whole house was furnished with cats in mind. There were pillows on the floors and upholstered chairs, and a castle made of cardboard with a lot of little rooms with pillows or cat beds inside. It was like a big dollhouse, full of cats. There were also a lot of empty shelves on the walls, spaced so that a reasonably good jumper could go from one to the other, all the way across the wall and we saw a cat named Connie do just that. Overall, I was impressed with what a nice place it would be for a cat who likes (or tolerates) strange people to live. Much nicer than the cage in a shelter where we got our cats.

Before we left, North selected two balls to buy for our cats, who turned seventeen sometime this week. (We don’t know their exact birthday—the shelter said mid-February when we adopted them, so North assigned them Valentine’s Day and sometimes we remember to get them gifts on or around that day.)

We went back to the hotel and watched the rest of our movie. I had a headache that had gotten worse over the course of the afternoon and was starting to make me sick to my stomach. I almost stayed behind when Beth and North went for Chinese because I wasn’t sure if I could eat, but I’d just taken a painkiller and I thought my appetite might return when it kicked in, but it never really kicked in, so I just sat with them and didn’t order any food.

We went back to the hotel and I went straight to bed. It was 8:15 when my head hit the pillow and I was asleep not much later than that. North had the idea for me to sleep in the twin bed so Beth and North could watch something on the laptop on the queen bed. It worked out pretty well. Beth says the square dancers were at it again, but my body was determined to sleep and only heard them briefly around 10:45. I slept almost eleven hours. I can’t remember the last time I got so much sleep in one night, maybe before kids. Beth also got a better night’s sleep, thanks to earplugs.

I woke up feeling a lot better. We had breakfast at the same café so I had another fabulous latte, along with a breakfast sandwich on a biscuit. Then we went to Coolfont Resort, where we swam in the salt water pool and soaked in the hot tub. There was a nice view in the hot tub room, a couple evergreen trees right outside the window, with a ridge in the background.

We went back into Berkeley Springs one last time, North made a lot of purchases at the crystal shop, including a crystal apiece for Beth and me. I got clear quartz, which is supposed to help me be productive and self-aware. Beth got rainbow moonstone which is supposed to help with stress. While we were there, I picked up a birthday present for my niece—a wooden magic wand with a woman’s face at the top with crystals emerging from her head. The crystals look like icicles, my sister thought, when I texted her a photo, and she thought Lily-Mei would like it because she’s obsessed with Frozen. From there we went to a cheesemonger’s and bought some local mozzarella, some Manchego, and some amazing Dutch aged Gouda.

We picked up some other foodstuffs on the road and found some tables along the canal where we had a picnic lunch. After we ate, North threw rocks at the ice on the canal again, and then we drove home.

We’ve been home and back to work and school for a few days. Beth’s been to the dentist, North goes to the orthodontist tomorrow, and we’ve all been to a trans kids’ and trans kids’ parents’ support group. North tried out for a part in the spring school play. Life rolls on. But I often find myself thinking about the waters of Berkeley Springs and its environs, in Roman baths, in canals little and big, in the Potomac River, and in swimming pools and hot tubs.