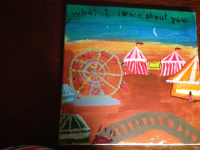 Noah graduated from high school on Friday morning. In case there was any chance we’d forget, there were plenty of reminders in the week before. He had to go to school to pick up his cap and gown and tickets on Tuesday afternoon and then on Thursday there were not one but two rehearsals, one for graduating seniors in the morning and one for the members of the band and orchestra who’d volunteered to play at graduation in the afternoon. (He also registered for his college classes on Monday, the day registration opened.)

In between these tasks, he helped me make baked ziti and clean fans, mowed the lawn, and started editing interviews he conducted in October for a podcast he’s been making for the kids’ preschool. Last summer and fall he interviewed a bunch of alumni and their parents about their experiences at the school as a volunteer project. He produced a few episodes from his summer interviews before school started in September, but other than taping a few more interviews, he hasn’t worked on it since then. Working on this and volunteering for two weeks at a film-making camp for middle schoolers are going to be his main summer occupations. But he also had enough down time to watch the livestream of Apple’s Worldwide Developers Conference keynote and to watch a half dozen episodes of Orphan Black with me over the course of several days.

Beth’s mom flew in for Noah’s graduation, arriving Thursday afternoon. Beth picked her up at the airport, but no one else could come to meet her because Noah was at the band rehearsal and I was taking North to a physical therapy appointment.  Beth and YaYa got caught in rush hour traffic and it was two hours before Beth had dropped her off at her hotel to check in and swung around to get Noah, North, and me so we could all meet for dinner. Noah and I read from The Lottery and Other Stories while we waited.

Once we were all together, we had dinner at a tapas restaurant in Silver Spring. We got a selection of olives, pan a la Catalana, a cheese plate, mushrooms sautéed in garlic, asparagus, Brussels sprouts, and patatas bravas.  They have a nice dessert sampler there, with churros, flan, tres leches cake, and sopapillas, but Noah wanted ice cream and it was his occasion, so we went to Ben and Jerry’s instead. Kung Fu tea is next door and North wanted bubble tea so we split up temporarily, though eventually we all ended up seated at Ben and Jerry’s.

As everyone was finishing up their desserts, North experienced another flare up in their leg (the third in a week). I was afraid we’d all be stuck there until it passed, but Beth brought the car around and I encouraged North to power through enough to stand up and walk to the car. (My back up plan was to see if Noah could carry them. I know I can’t.) Fortunately, they were able to walk across the street and get into the car, where we had some painkiller in the glove compartment. That night they slept on some cushions on the floor of their room because they couldn’t get up to the ladder to their loft bed.

As if that wasn’t enough excitement for one evening, after North was settled into bed, Beth noticed something was amiss with our cat Matthew’s paw. There was matted fur with something bright red in the center. From a distance, it looked like he was badly hurt and I was imagining a late night trip to an all-night vet, when we got closer and saw he had something clear and sticky all over that paw and a scrap of red paper had stuck to it. So we all got to go to bed, which was good because the next day we were all had to get up early.

Graduation was taking place at the basketball stadium at the University of Maryland and there were at least two graduations taking place there that day. Noah’s was at 9:00 a.m. and the musicians had to be at school to help move instruments into the van that was transporting instruments to the stadium at 6:15. He set an alarm for 4:45, slept through it, and Beth woke him at 5:05. She dropped him off at school came back to shower and eat, and Beth, North, and I headed over to YaYa’s hotel a little before 7:30. He texted Beth to tell her that the U-Haul’s parking brake was stuck and it looked like they might not be able to get any of the percussion instruments to College Park.

In further misadventures, as we got into the car North noticed Noah’s white, purple, and black cord lying in the driveway, where it must have fallen while he was getting into the car at the crack of dawn. It was for completing the Communications Arts Program and he was supposed to wear it around his neck. Beth scooped it up, in hopes of getting it to him.

We got to the stadium around 8:10 so there was ample parking and we could have sat anywhere we wanted, but North didn’t want to navigate the steep steps, so we stayed up in the nosebleed seats near the entrance. The band was practicing on the court, with all their percussion instruments (someone had fixed the van’s brake), so Beth walked down to the lowest seats, called his name and tossed the cord to him. It was lucky he was playing with the band because otherwise he would have been sequestered wherever the rest of the graduates were and it was unclear if she would have been allowed back there.

The ceremony started promptly at nine. The band played a tribute to John Williams, which began with the Star Wars theme and then some processional music by Wagner, “Pomp and Circumstance,” and “The Star-Spangled Banner,” as the 718 seniors (minus members of the band, orchestra and chorus) filed onto the court in two lines, one in red robes and one in white. Until several years ago, boys wore red and girls wore white, but now it’s gender-neutral. You can choose whatever color you want. Red is slightly more popular.  Once everyone was seated, there was a red rectangle on the left, a smaller white rectangle on the right, filled in with more red at the bottom, plus the black robes of faculty down the outer sides, along the aisle between the rectangles, and in the back. It was kind of a cool, watching this design take shape.

It was also a treat to be able to see Noah playing, as percussion is usually in the back at concerts. It was in the back here, too, but because of the stadium seating we could see everyone on the court. Even as high as we were, I could still sometimes hear him on the snare drum and the bells, though sometimes the bass drum drowned him out.

I haven’t been to a high school graduation since my own (as I was in Iowa, taking a grad school summer school course when my younger sister graduated from high school in Pennsylvania).  But it was about what you’d expect. A lot of speeches, interspersed with a chorus performance, a band and orchestra performance of the school’s alma mater, and then after about an hour, the names. It takes a long time to read 718 names, almost another hour. And, to my surprise (and apparently Noah’s, too) the musicians were all called first, so he walked across the stage, shook his principal’s hand and received his diploma case (the actual diplomas were distributed later) quite early in the proceedings. I’m not sure why he didn’t know this was going to happen, as he’d been to two rehearsals the day before, but it went smoothly enough. It looked like everyone knew what they were doing.

Listening to the rest of the names and watching kids on the Jumbotron was full of sentimental moments as Noah’s classmates from preschool, elementary school, middle school, and high school went by. Because Blair is such a big school and Noah’s been something of a lone wolf the past several years, I didn’t even realize some of them went to his school. A few names I was waiting for, but it was hard to know exactly when they’d be called because the graduates went up in alternating groups of red and white so alphabetization was only approximate. Finally, all the names, from Abarca to Zimand, had been called, the students turned their tassels and they were graduates. They weren’t supposed to toss their caps, but of course, some of them, including my usually rule-bound son, did. North asked later, how you got your own cap back if you did that and he said if you were in the main area , you probably didn’t, but if you were only graduate sitting with the band in the percussion section, it wasn’t that hard. The band played a recessional from Aida, and everyone filed out.

We expected a long wait for Noah because he had to help pack up the percussion instruments and go get his diploma. As we lingered outside the building, on a pretty early June day, we chatted with the mother of Jazmín, one of his preschool classmates, and the father of Ruby, his best friend for most of kindergarten. We talked about where the kids are going to college and later Beth reminisced about how once when Noah fell and was hurt on a kindergarten field trip to a grocery store a few blocks from the school, Ruby’s dad was chaperoning and carried him all the way back to school. Noah came out earlier than we expected. Apparently, as he was helping with the instruments, the band teacher told him, “Go on. You’re done.” We took pictures of him with YaYa, with North, with Beth and me, and with Beth and YaYa. Then we dropped North off at school for their afternoon classes and went out to lunch. Told he could have lunch anywhere he wanted, he chose Noodles and Company. He’s a man of simple tastes.

We went back to YaYa’s hotel so she could change clothes and then back to our house, where we hung out, napped, and read. When North got home from school, Noah opened graduation cards and presents. He got a t-shirt for tech podcast he listens to, a pair of cordless headphones, a teleprompter, and a lot of checks, cash, and gift cards. North’s present to him was a series of five paintings. The captions read: What I love about you (an amusement park scene)…Is that even on the scariest of rides… (a roller coaster)…You’ll always hold my hand (two clasped hands)… And let me know that I am safe (closeup of an eye)…and I will always believe it (heart).

Noah wanted to deposit his check, so Beth ran him up the credit union, and then YaYa, Beth, North, and I went for a stroll around the neighborhood before a pizza dinner. Then we came home and Noah packed for an almost two-week visit with YaYa. In the morning, we all had breakfast together at Panera before Beth drove YaYa and Noah to the airport.

He’s done. Now it’s time for him to go on, to West Virginia for some grandmotherly spoiling, then a week at the beach with more family, then a month and a half at home making podcasts and teaching kids to make movies, and then on to the great adventure of college.