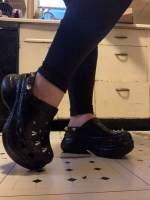 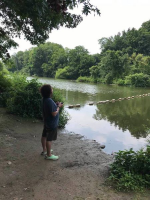 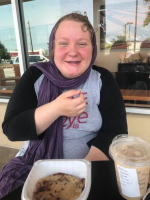 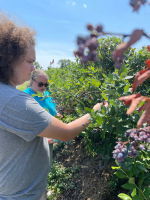 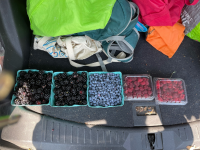 So for some reason we didn’t decide to squat in the beach house and we drove home from the beach. On the way out of town we stopped at the Crocs outlet and Beth, North, and I each got a pair. Beth’s are gray and mine are black with a white band, which I thought was kind of daring, as I’ve always had navy blue ones, but North got a pair of black, glittery platform Crocs with spikes on them. They are the most unusual pair they’ve had since they were five and had a pair of glow-in-the-dark unicorn Crocs they adored. So in case you were wondering how long it takes to go from unicorn to Goth-themed footwear, the answer is a decade.

We went out for pizza and salads at Matchbook in Silver Spring, near YaYa’s hotel. In the morning, Beth helped YaYa with her new phone, then she brought her by the house so everyone could hang out in the back yard a bit, where we showed her our garden and said our goodbyes before Beth drove her to the airport. We were all sad to say see the last member of the beach house crew leave.

But one of the nice things about a Friday-to-Friday rental is you still have the whole weekend when you get home, so you’re not spending it all doing laundry (me) or grocery shopping (Beth). We had time for two outings, first to an outdoor screening of Cruella and then to a park to walk around a lake and fly Noah’s drone.

Mike (the filmmaker who sometimes employs Noah) and his wife Sara (the Secretary-Treasurer of the union where Beth works) hosted a backyard showing of Cruella the Saturday after we returned. Because Mike’s a filmmaker, it wasn’t projected on a sheet or the side of the house, but on a portable movie screen, as big as you might see in a small theater. They provided popcorn, candy, and drinks, and showed Warner Brothers cartoons before the feature presentation. I didn’t know too many of the people there other than Mike, Sara, and their three girls, but it was a fun event. My assessment of the movie (and Beth’s, too) is that was enjoyable and the performances are good (especially Emma Thompson as the Baroness), but it doesn’t really do the work of a prequel because it’s hard to see how Cruella’s character arc leads to her character in the original. For what it’s worth, Sara argued that it’s supposed to cause you to see the original Cruella in a new light, but I’m not sure about that.

Sunday afternoon, Beth, Noah and I went droning. Noah had some trouble with his drone the last day we were at the beach and he’d made some repairs to it at home, but since you can’t fly a drone as close to Washington D.C. as we live, he wanted to go to a park where he could test the repairs. We went to Centennial Park in Howard County. We’d been there once last summer, in early August, just a few weeks into North’s paralysis. I was surprised how well I remembered the path around the lake. We even saw a heron by the same little bridge where we’d seen a heron the year before. Because we weren’t pushing North in a wheelchair this time (North wasn’t there at all, having elected to stay home), we walked further this time, all the way around the two-and-a-half-mile lake loop, and off a little spur to see a pond. Noah flew in a few places and the drone functioned perfectly. As we often did last summer, we got Starbucks on the way home. Sipping my pink drink evoked that odd summer and all its twists and turns.

Neither of the kids had camp, a volunteer gig, or work the next week, but North had an appointment at the pain clinic, an orthodontist appointment, and a therapy session, and Xander had an appointment with a veterinary cardiologist. Only the therapy was online, so Beth was busy driving the kid and the cat around. (Noah had a drum lesson, too, but gets to the music school by himself on the bus.)

Monday we went to the pain clinic at Children’s National Hospital for a follow-up visit about North’s chronic pain. The doctor thought their gait looked good, and we ended up with a prescription for six sessions of physical therapy, probably starting with aqua therapy to see if that can help them walk longer distances and with less pain. North will also be seeing a pain psychologist in the fall to work on coping methods. North’s not super excited about another round of physical therapy.

Wednesday North and I went to the Crossroads farmers’ market and got pupusas for lunch. This walk is not quite three-quarters of a mile each way and that’s in North’s comfort zone, but this time they did it with no crutch and in platform crocs to boot, so it must have been a good day for them.

That same day Noah and I finished reading The Gods of Jade and Shadow and watching the first season of The Leftovers. We’re hoping to get one more season in before he leaves for school in mid-August. (People in various combinations that include Noah have also met summer goals of finishing season 2 of Buffy the Vampire Slayer and season 4 of Blackish, and the whole family is closing in on season 2 of Dickinson.)

On Thursday, Beth took Xander to see a veterinary cardiologist, on our vet’s recommendation. I would have gone in case there were any hard decisions to make at the appointment, but they are only letting one person per animal in the clinic. And the upshot is his heart looks surprisingly good for a cat his age, whose littermate died of a blood clot. His blood pressure is good and he has some mild to moderate thickening of his heart muscle. We’re supposed to give him aspirin hidden in a cat treat, more because of his brother’s medical history than anything the cardiologist saw on the scan, and if we want we can get him re-assessed in six to nine months. The vet thought when he seems to lose control of one or both his back legs (and this happened again the day before the appointment) it’s his arthritis acting up.

I’ve thought he might be having a life-threatening emergency three times now this summer, so this is a relief. We considered boarding him at a kennel when we went to the beach, but we decided to have a cat sitter check in on him every day and I’m glad now that’s what we did because being boarded would have been stressful for him.

The big event this weekend was a trip to Butler’s Orchard. We’ve been to the farm market a couple times this summer, but we hadn’t picked anything ourselves. The weather was lovely, low eighties and not that humid, and three kinds of berries were in season, so it seemed like a good time to go. We got two quarts of blackberries, a quart of blueberries, and two pints of raspberries. Blueberry season is almost over so there weren’t many people in that field, but there were more folks among the blackberry canes and I could hear parents of small children saying things like: “Now we’re only going to pick the black ones, not the red ones. No, not the red ones. That one’s not ripe yet. We’ll go to the raspberries later, that’s where we pick the red ones.” Let’s say it was evocative of berry picking in my children’s younger days. I appreciate not having to say anything like that or having to worry about either of them running into the path of an oncoming farm truck.

There’s a sign as you leave that says, “Have a Berry Nice Day” and, as I usually do, I asked if everyone had, and Beth said yes. I did, too.

When we got home I froze half the blackberries and half the raspberries, and today I made a blueberry kuchen and there’s raspberry ice cream in the freezer that North made. Sometime in the next couple weeks I’ll use some of the blackberries in a peach-blackberry cobbler, so I think we shouldn’t have any trouble enjoying the fruits of our labors. Now that it’s August, I can feel the end of summer on the horizon, which makes me happy and sad for the obvious reasons. I hope your late summer days are happy and fruitful.